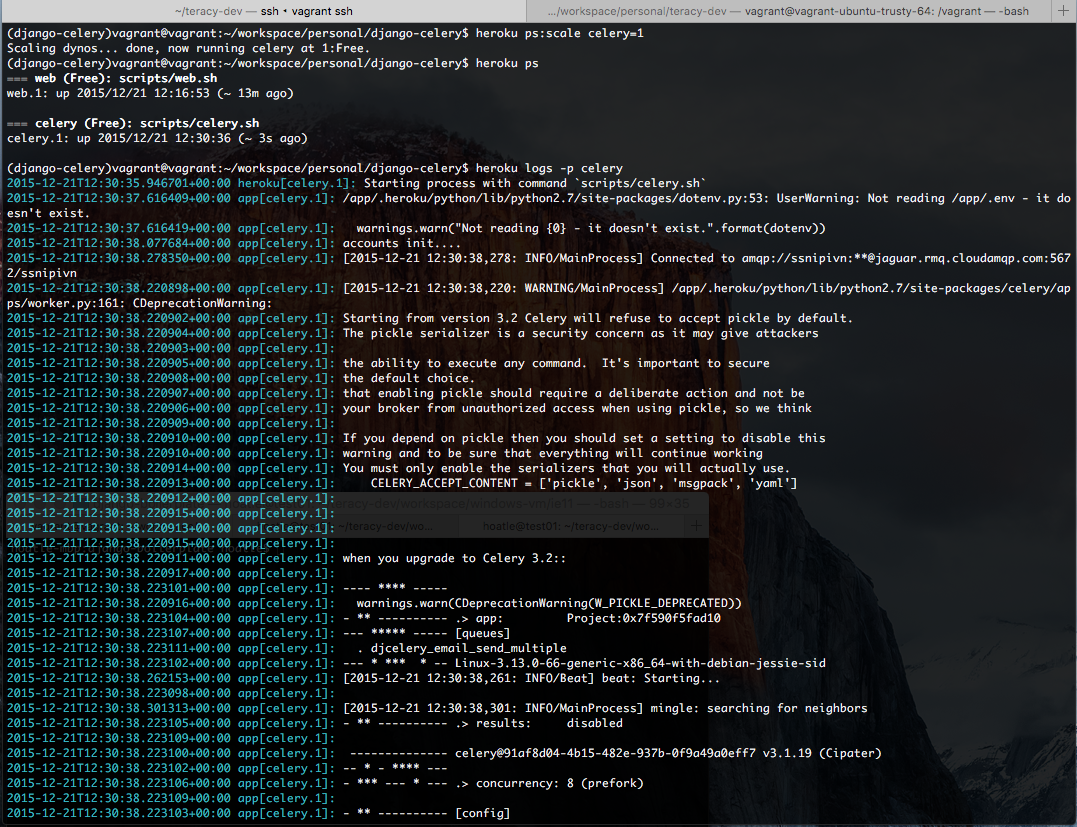 When I was asked to use a distributed task queue for emails on a Django project, I chose django-celery-email. However, during developing and testing, I faced some problems due to the lack of clear guide from django-celery-email, so I wrote this post as a step by step guide for anyone who wants use it with much ease. So let’s get started!

By following http://12factor.net/config, we should export the required variables. For development convenience, .env file is supported and recommeded only for development mode. So let’s create .env file at django-celery/.env with the following content:

ADMINS variable is used for testing emails, you should fill in your admins details.

Open http://localhost:8000, you should see the 404 error page and it’s expected. We’ll add functionalities for the application by next steps.

After that, you should access your deployment app at: https://<your_app_name>.herokuapp.com/

I created dj-celery app name and it’s availalbe at: https://dj-celery.herokuapp.com/

From now on, to update the deployment on Heroku, we just need to push new commits to the heroku repository.

To see how emails work with celery, let’s add user management functionalities which should also send emails for confirming when signing up.

There is already an application for that, it is: django-userena.

You should see the page of http://localhost:8000/accounts/signup now. Let’s signup a user and you should see something similar on the console:

Note: we need to set SITE_DOMAIN and SITE_NAME to match the created Heroku application. These variables are already configured by django-boilerplate by default on development mode.

You should see the page of https://<your_app_name>.herokuapp.com/accounts/signup now. However, don’t try to signup on the Heroku app yet because we need to configure the email backend.

To see all available variables, use:

and you should see something similar to this:

We see that MAILGUN_XXX variables are provided, we will use it on development mode by adding the following lines into the .env file from the config content of your app environment:

Let’s test if the email works:

You need to check your mailbox to see that a test email should be sent to you.

Now you could signup and receive email at: https://<your_app_name>.herokuapp.com/accounts/signup/

If could see that mail.mail_admins is blocked and waiting until the email sending is finished. To avoid these blocking, let’s use Celery. Celery app is already setup by django-boilerplate at: https://github.com/teracyhq/django-boilerplate/commit/7ea4306ae295d38ae35610b0882db1ea81a5d613

update EMAIL_BACKEND for .env file with:

One important step is to enable Celery by using https://elements.heroku.com/addons/cloudamqp

To use cloudamqp heroku addon:

and you should see CLOUDAMQP_URL environment variable by $ heroku config

Let’s add that variable into the .env file:

To start Celery app: $ ./scripts/celery.sh, and you should see the following content:

After that, sending test email to admins should work without any blocking by opening a new terminal window:

That’s it. We’re done on development mode. Let’s deploy on Heroku with:

$ heroku logs -p celery to see the logs of celery, you should see something like this:

You could try sending test emails to admins with:

That’s it, email sending is not blocked anymore. The full project for this guide is located at: https://github.com/hoatle/django-celery

This is a bonus if you need to remote debug Python applications. You could apply this for Django projects, too: http://dev.teracy.org/docs/develop/python_dev_guide.html#debugging

In this post, I’ve guided you step by step to setup Celery as a distributed task queue for emails on Django projects. It’s very easy to set everything up thanks to the django-boilerplate project.

If you need any Django consultant or Django development, don’t hesitate to contact us at: hq@teracy.com and we’re very eager to work with you on Django, Python projects.